Stargazing from the Summit of Sierra Negra

There runs through the heart of our country a mighty spine of rock … a jagged 3,000 mile wonder that separates the Great Plains from the Western Plateau, and the deserts of New Mexico from the woodlands of Canada. Truly, this is the Purple Mountain Majesty that we sing of, and the Rocky Mountain High that has helped define the adventurous spirit of America.

Whether you’re a geologist or anthropologist, historian or hiker, the Rocky Mountains are a wealth of data to analyze, stories to tell, and trails to explore. With this in mind, we’ve come up with a list of Fun Facts about the Rockies that should excite and entertain greenhorns and old-hands alike.

1.) You can hike from Mexico to Canada

Anyone who is itching for an up close & personal kind of relationship with the Rocky Mountains would do well to hike the legendary Continental Divide Trail. This ambitious mountain path takes trekkers from the desert of the Mexican border up to the high Rockies of Canada. About 3,000 miles in length and an average of 5 months of hiking, the “CDT” isn’t a bad way to catch up on fresh air & exercise.

2.) The Rockies are 76 Million Years Old

Formed by a blend of violent tectonic activity and gradual glacial carving, the Rockies appeared about 80 million years ago, about the same time the Tyrannosaurus ruled the earth. However, the Rocky Mountains are also a hotbed of geological activity, with some sub-ranges appearing within the last 100,000 years.

3.) It’s One Hundred Ranges in One

As opposed to being one long, interrupted series of mountains, the Rockies are actually comprised of over 100 different mountain ranges located between Canada and New Mexico. If you are a small mountain range and you live in Idaho, Montana, Wyoming, Colorado, or New Mexico, you are most likely a member of the Rocky Mountains.

4.) There are Nine Different National Parks in the Rockies

If the staggering expansiveness of the Rockies has not yet been fully expressed, then consider this: there are 9 different National Parks within the Rocky Mountains if you include both the US and Canada. Banff, Kootenay, Yoho, and Jasper are on the Canadian side, while Yellowstone, Grand Teton, Glacier, and Rocky Mountain, and Great Sand Dunes National Parks all grace the western end of the United States.

We don’t even want to think about how many State Parks there are.

5.) They Divide the Nation’s Water

The Continental Divide, or the Great Divide, is one of the most interesting geological features within the Rocky Mountains, as it literally bisects the continent into two distinct parts: one side where all the water is headed towards the Atlantic Ocean, and one side where it’s all headed to the Pacific. Every continent except Antarctica has a continental divide line, but there are very few on the planet that run along a line that is as high and rugged as the Rocky Mountains.

There are actually trails in Colorado and Wyoming where you can stand at the branch of a high mountain river, and watch as one side falls West towards the Pacific Ocean, and the other East towards the Atlantic.

6.) They’ve Been Named That for a While

According to the modern consensus, the Rockies got their name from the Cree Nation’s “as-sin-wati”, roughly translating to the Rock Mountains. In 1752, the European explorer Jacques Legardeur de Saint Pierre cemented this into popular use by recording them in his journal as “Montagnes de Roche”, or the Rocky Mountains. 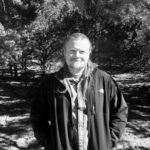